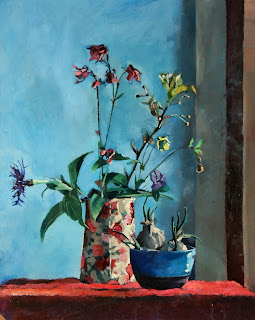 
I love to paint from life, whether I’m painting a landscape, a person or a bunch of flowers. I like to pay really close attention to what I’m painting and to follow my instincts when I make the marks. I mean, to not put everything down, but to choose what’s important and -without thinking about it- paint it down and go on to the next move. Keeping active.


I have always been interested in painting and drawing people, there is so much to examine in a particular face and head.


No matter what I’m painting though, it’s the light that’s interesting. Oil paint is just right for describing light, whether it’s falling on an eyelid or a petal.


At the moment I am working on a series of still life oil paintings. I set these up in the kitchen because I love the cerulean blue colour of the wall and the constant natural light there through the day. I want the colours to be as vibrant as they are in real life and the painted marks to have clarity and a life of their own. 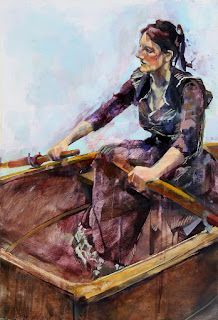 Here's Adel, in the boat at Damian Callan's studio a few weeks ago, she has some great costumes, and always poses really convincingly. I had the feeling she was rowing around some gloomy lake, lost in her thoughts.
It was a lovely scene to observe and describe, measures about 20"x30", and is painted on card primed with gesso. I prefer the smooth card to the textured canvas surface. I started this one with acrylic, applying it with a rag for the most part, positioning Adel and roughing in the angles of the boat. 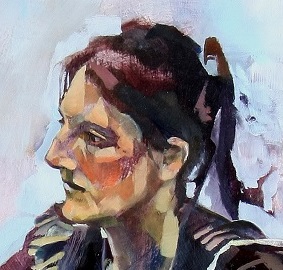 Usually I paint in acrylic for ages to be sure of where everything is, but here I worked a lot out in oil, and found it quite liberating to do.
I also remember paying a lot of attention to Adel's face before I really felt I ought to. Usually painting the head is the bit I savour at the end, but here I launched into it early on. I think it helped me do less elsewhere.
I like that there's very thick paint on some areas, as in the water behind her head, and that it's very thinly applied elsewhere, for example inside the boat.
Good having all the lines/ angles of the oars and boat to contrast the figure against, and to provide a simple setting for this lovely seated figure to occupy . 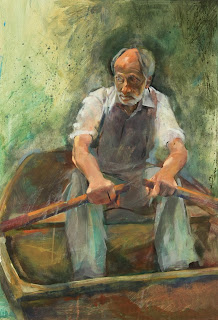 Here's Graham, same boat, different day. This was my first time painting the boat in the studio. This time he was definitely on the sea, there's a storm approaching, and he's already having to tackle choppy waves!
Then again, that could be drooping greenery behind him... in any case for me there's a feeling of action in this painting, a brisk movement in the arms and cautious turn of the head. We had the same spotlight on Grahams head as we did for his portrait (first blog post) revealing the line of his brow and describing the particular curve of his head. 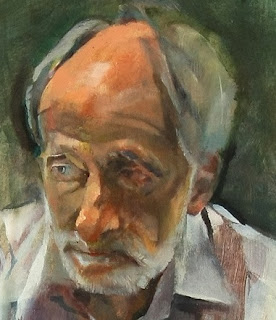 Seeing these two paintings together for the first time I'm struck by how matt the surface of this painting appears in contrast to the one above. The top painting has a richer texture I think, because it has been largely painted in oil, in this one oil paint is applied more sparingly, mostly on the face and hands.
Defining the edge of the boat in front of the figure goes a long way in describing the space he occupies. Since it's the  figure that most interests me, I'm happy when the space is quickly and easily described.
If you have a boat and willing model to hand(!!?!)...have a shot at painting them, you'll be transported to a watery landscape for a few hours...very therapeutic!
(speaking of rich surfaces, I saw Rembrandt's 'Jeremia mourning Jerusalem' when I was in Amsterdam last week...now there's a rich painterly surface if  ever I saw one, beautiful!)

"Congratulations,
We’re pleased to inform you that one or more of your work (s) have been pre-selected to go through to the next stage of selection for this year’s exhibition. " 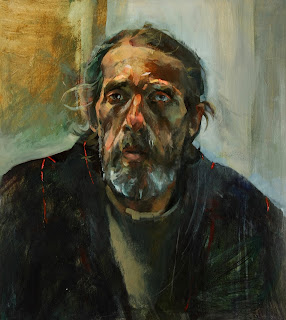 Just saw this message yesterday, so, through to the next round of The Royal Society of Portrait Painters Annual exhibition at The Mall Galleries in London, with this portrait of Alasdair

And this portrait is through to the next stage of selection for the new exhibition 'Self, Open Exhibition 2013' also at the Mall Galleries in London 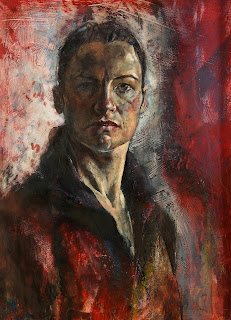 Painting the side profile

Lots of my paintings recently have been of models from the side, here are a couple below.
Something about the space our faces occupy form this angle interests me, the shape we cut into the background. 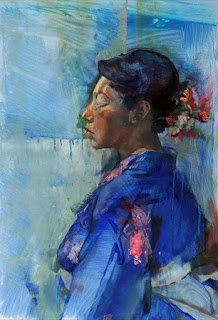 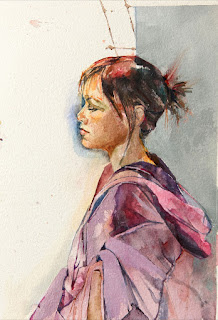 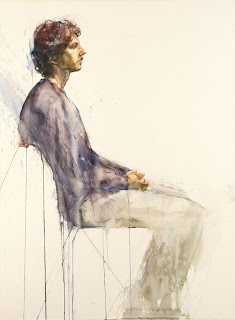 Painting Matthew;
I had this big sheet of heavy watercolour paper, and had the urge to use it all to capture Matthew's interesting, understated pose. To begin with I used the watercolour paint loosely and with big sweeping strokes, this was great fun and quickly established Matthew's general position, some unexpected and exciting patterns began to emerge too. Watercolour paint really is irresistably absorbing. I often find that, by some fluke, the run of the paint corresponds with what I am trying to achieve, and I'm half way there.

Once the general sweep of the body was convincing enough I was able to really enjoy describing the skin on the face and hands. Being the only warm tones, they easily read as skin. Then I didn't need much to tie it all together, just a few descriptive lines here and there .

Thanks to Matthew who was so settled in himself throughout, and to Damian who insisted there was no need to 'do the chair'!
(This watercolour, of artists model, Matthew, was painted at Damian Callan's workshop at Wasps studios in Dalry.)

Hurrah! I won a Windsor and Newton award at the RWS Contemporary watercolour exhibition at the Bankside Gallery in London, with this painting of 'Matthew' 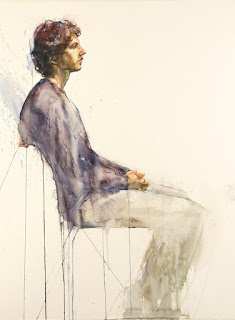 This painting of Dimos was also selected, both are on show this week at the Bankside gallery. 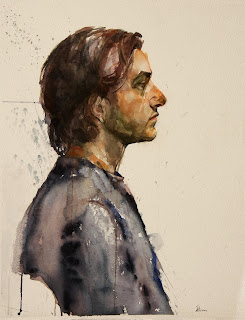 Then on the 15th of March I am exhibiting 6  paintings of well known golfers as part of the Greywalls exhibition at Gullane Art Gallery.(www.gullaneartgallery.co.uk) They have all been winners of the British Open when it was held at Muirfield golf course near Gullane. Heres one of them... 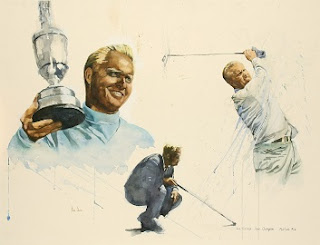 All 6 paintings will feature in a book on Greywalls to be launched at the same time as the exhibition...15th March
Posted by Aine at 12:57 No comments: